Seven millennia since its invention, leather remains one of the most durable and versatile natural materials.

However, some consumers question the ethical ramifications and environmental sustainability of wearing products sourced from animals.

This shift in social standards is the main reason we’re seeing a wave of synthetic substitutes heading for the market. But these materials face the same disposal issues as any synthetic plastic. So, the leather market has begun to look to other innovations. As strange as it might sound, the latest contender is the humble fungus.

Research by my colleagues and I, published today in Nature Sustainability, investigates the history, manufacturing processes, cost, sustainability and material properties of fungus-derived renewable leather substitutes – comparing them to animal and synthetic leathers.

How unsustainable is animal leather, actually?

How sustainable leather is depends on how you look at it.

The livestock sector’s sustainability issues are well known. According to the United Nations Food and Agriculture Organisation, the sector is responsible for about 14% of all greenhouse emissions from human activity. Cattle rearing alone represents about 65% of those emissions.

Still, it’s worth noting the main product of cattle rearing is meat, not leather. Cow hides account for just 5-10% of the market value of a cow and about 7% of the animal’s weight.

There’s also no proven correlation between the demand for red meat and leather. So a reduction in the demand for leather may have no effect on the number of animals slaughtered for meat.

That said, leather tanning is still energy- and resource-intensive and produces a lot of sludge waste during processing. This gives leather a higher environmental impact than other minimally processed animal products such as blood, heads and organs (which can be sold as meat products or animal feed).

From spore to mat

Fungus-derived leather technologies were first patented by US companies MycoWorks and Ecovative Design about five years ago.

These technologies take advantage of the root-like structure of mushrooms, called mycelium, which contains the same polymer found in crab shells. When mushroom roots are grown on sawdust or agricultural waste, they form a thick mat that can then be treated to resemble leather. 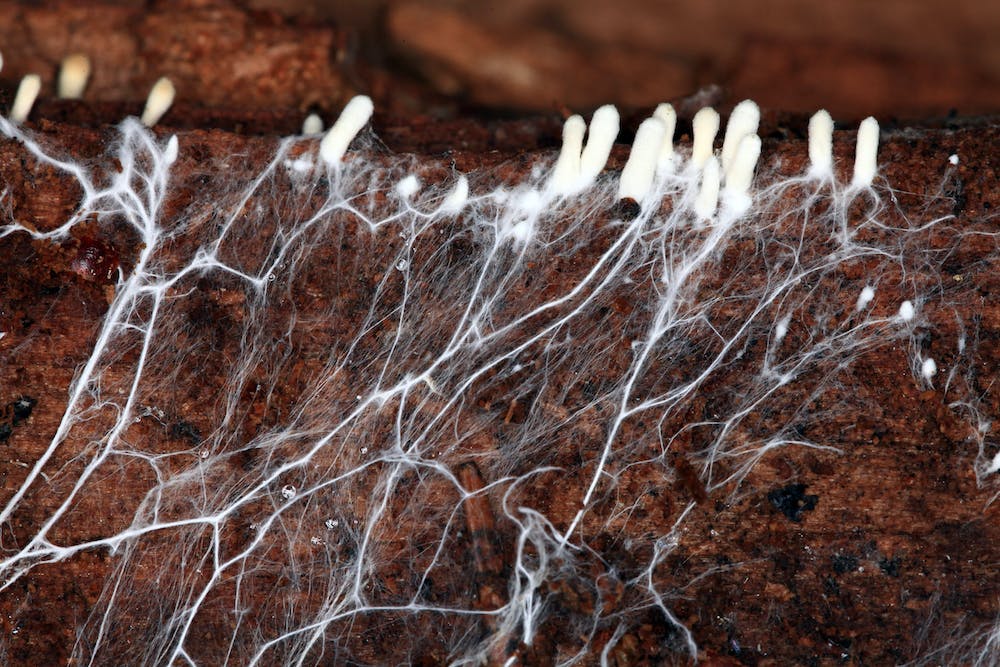 Mycelium is the vegetative body for fungi that produces mushrooms. Fungal colonies made of mycelium can be found in and on soil and wood. Shutterstock

Because it’s the roots and not the mushrooms being used, this natural biological process can be carried out anywhere. It does not require light, converts waste into useful materials and stores carbon by accumulating it in the growing fungus.

Going from a single spore to a finished “fungi leather” (or “mycelium leather”) product takes a couple of weeks, compared with years required to raise a cow to maturity.

The process is quite simple and can be completed with minimal equipment and resources by artisans. It can also be industrially scaled for mass production. The final product looks and feels like animal leather and has similar durability.

It’s important to remember despite years of development, this technology is still in its infancy. Traditional leather production has been refined to perfection over thousands of years.

There are bound to be some teething problems when adopting fungal leather. And despite its biodegradability and low-energy manufacturing, this product alone won’t be enough to solve the sustainability crisis.

There are wider environmental concerns over animal farming and the proliferation of plastics – both of which are independent of leather production.

Nonetheless, using creativity to harness new technologies can only be a step in the right direction. As the world continues its gradual shift towards sustainable living, perhaps seeing progress in one domain will inspire hope for others.

Will I be wearing it anytime soon?

Commercial products made with fungi-derived leather are expected to be on sale soon – so the real question is whether it will cost you an arm and a leg.

Prototypes were released last year in the US, Italy and Indonesia, in products including watches, purses, bags and shoes.

The signs are promising.

MycoWorks raised US$17 million in venture capital last year.And while these fundraiser items were a little pricey – with one designer bag selling for US$500 – manufacturing cost estimates indicate the material could become economically competitive with traditional leather once manufactured on a larger scale.

So next time you pass the mushrooms at the supermarket, make sure you acquaint yourself. You may be seeing a whole lot more of each other soon. Our Picks For The Best Natural & Organic Rosehip Oil Brands