You might have noticed lots of new faces on billboards; lately, even a cheeky face or two can be found in the front of people’s yards, which to be honest, can be slightly disturbing.

Across the media we watch these faces chirp about jobs, the economy, immigration, housing – there is a lot of noise, and it’s confusing AF.

With Australia’s Federal Election happening on the 18th of May and pre-and postal voting already open, the race is well and truly on for the politicians in the game. 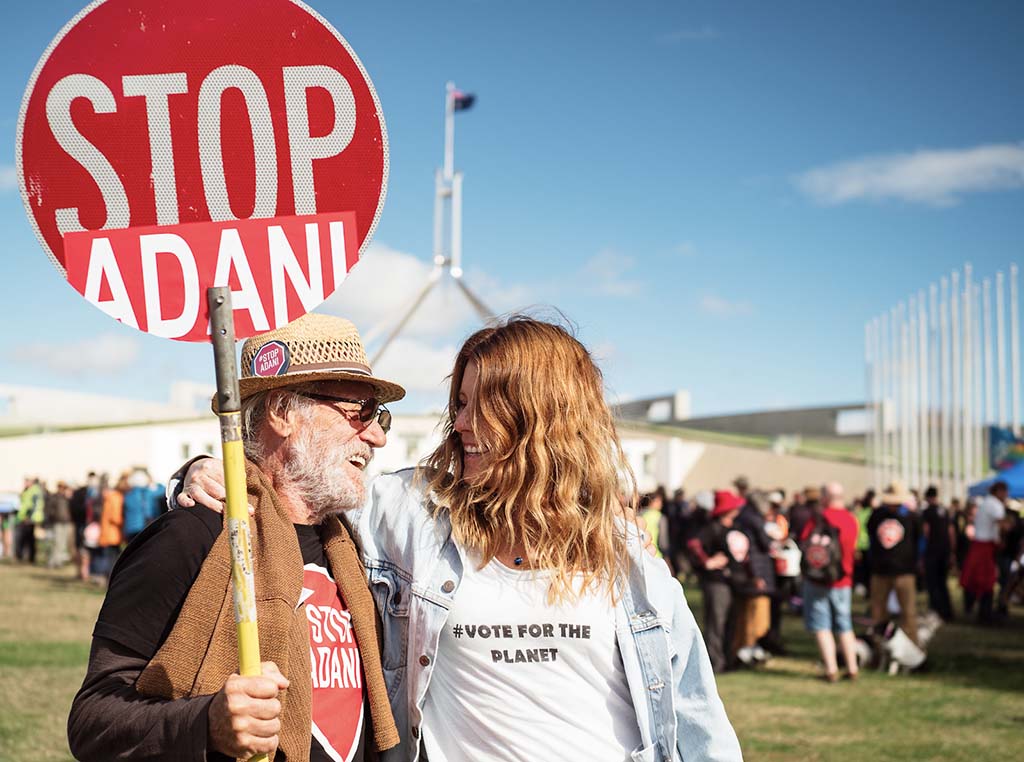 However, what has become apparent after spending some time traveling up the east coast of Australia with Bob Brown, after our Environment Minister released the approval for the groundwater for the Adani coal mine (just moments before the election was called)  is that this election was probably the most important one we have ever had.

(If you haven’t heard about the Adani mine. It’s basically a massive new coal mine that will be one of the biggest in the world and also open up the Galilee basin to more mining, right at a time where the only thing we should be doing is drawing carbon-down into the ground, not pulling it out. You can read more about it here).

And you know what? From all these talking heads throughout the media. I have to say; we are talking about a lot of shit that’s not going to matter if we cook our home.

Just last week the UK Parliament declared a climate emergency, and 17 councils in Australia have also declared an emergency.

When I got to Mullumbimby 2 weeks ago we had a rally with five thousand people, the streets were clogged, and there was certainly energy in the air. But something was missing. I could feel the momentum, but deep down I felt it wasn’t enough to turn this thing around and turn our Federal Election into a Climate Election.

My dear friend Matt Kendall looked me in the eye, and together, we knew we had to do something more. So, we did what we always do when we want to change shit, we put our smartest on-hand mates into a beautiful space, to hack the problem.

You probably already know why this is important, but so you can have the most important facts to convince all your family and mates, here are some bloody good reasons:

But, here we are, as a country, with a gigantic coal mine closer than ever to going ahead next to our Great Barrier Reef with seismic testing occurring in our Great Australian Bite and more planned up the East Coast between Newcastle and Manly.

There are two ways to react to a situation like this: despair, and indignation

Despair is passive; it happens to you and is a natural reaction to the significant and seemingly intractable problems that we face in our current system. But despair is a total loss of hope.

Indignation is a provocation by an injustice. A provocation to take action. And embedded in both the provocation and the action is hope. Standing in that field in Mullumbimby with Bob Brown, we chose indignation. We chose hope.

Not only do we believe that we can collectively turn this around and stand up to these international organisations (who are bullshiting Australians about the number of jobs the mine will create). We know we can!

The rising of humanity is already happening. We just had 150,000 kids strike in Australia last month, Greta Thunberg leading a global movement of school strikes that was attended by 1.5 million people, and Extinction Rebellion shutting down central London, resulting in the UK Parliament declaring a climate emergency last week.

So, it’s time we combine our superpowers, to do some epic shit Australia. What is our part in all of this? How do we use our votes wisely and how do we vote for the future and for all these kids on the streets who don’t have the power to vote?

Last night I called my mum, someone I know usually has different political preferences to me, and I asked her if I could help her vote for the planet and my future, and she said yes. I had goosebumps and then tears.

So now I’m going to do this with all my family and everyone I know between now and the election. But we need everyone to do this. Because we are all influenced most by those in our social circle, that’s right; the real influencers aren’t Insta stars with 200k+ followers, they’re your mates. They’re you!

It’s been just one week since we launched #votefortheplanet and we have already had over twenty-four thousand views of our launch speech, which was a conference we hijacked with two hundred business leaders, and we’ve had over a thousand shares of our first draft climate policy scorecard. This is a live document so please check the website here as policies are updated.

It comes down to us to tell the narrative of this election, and together, write the story of our country’s future. This only thing we are voting for this election is the planet, not a leader we “kind of” like or a party that will give us the best tax breaks, we are using our combined power to demand better from anyone in the running.

Why? Because we know the media isn’t doing its job at getting the message of our climate emergency out. So we need to become the media. News that triggers an emotional response spreads as fast as drought-induced wildfire, and we each have access to diverse networks conveniently at our fingertips.

How do we normalise voting for the planet? We talk about it.

In talking about it, I’ve also had people telling me they want to “donkey” vote because there is no one they want to vote for. Please don’t do that, make it count, show you want change by voting differently, and remember people have lost countless lives over the right to vote, and it should not ever be wasted.

The Issue That Rules Them All

Taking a single issue approach to an election has always been a fringe exercise, a protest vote. But not for this election. Once you take a systems thinking approach and accept that climate change is the meta-issue, the issue that rules them all, it suddenly becomes so much clearer how you should vote.

Be sure to check out this website – as we’ll be keeping this up to date as much as we can with any policy changes, hopefully applying pressure on our political leaders to turn their red crosses into green!

So what do we know so far?

WTF is it and how does it work?

SOLD OUT. SORRY. OK. So. I’m delivering. Since so many of you showed passionate interest in how to #voteclimate, I’ve done as told and organised a soiree. A good, mindful, hopefully FIRED UP chat all things #voteclimate. 🏄🏼‍♂️ Upstairs @thecornerhousebondi May 9. 530-7pm. Free wine.🍷 @drkerrynwentworth has put up her hand to thrash it out with me. Bonus – she’s part of the 6-member coalition of independents unifying to vote on climate change. 👊🏼 The link is in my bio. Make sure you book 🙏🏼 Only 100 places. * All ages are very welcome. I’d love to see some first-time voters there. * Your friends who are feeling lost in all this are welcome. Tag them! It’s not going to be highly political…more heartfelt. More on all of this to come…(I’ll be doing a guide to help you choose the best person to vote for if you care about the climate in every electorate soon) #giveashit #votefortheplanet PS I’m taking all questions you have and will endeavour to have them answered 💥

Politics in Australia over the past decade has been farcical. With a litany of clowns, villains, and malevolent buffoons funded by billionaires and multinationals looking to protect their stranded assets. This has resulted in a growing ‘uninterested many’ who believe their vote doesn’t count.

Except this time, it does. Because we have one big meta-reason to focus our votes on something that matters at an existential level – our planet.

The best we can hope for is a Labor Government with a strong contingent of Greens and climate-aligned candidates in both the Senate and in the House of Representatives. This will help push the climate-denying and delaying factions into a place, where they can’t obstruct climate-based legislation. It will also pull Labor towards accepting that this is a Climate Emergency and working with the Greens and independents to push through the kind of systemic change we need at the speed required to fix this hot mess. This best-case scenario is achievable. But if we want it, we have to vote for it, strategically, and en masse.

Even wild success in this election would be but another small step in a global climate movement starting to take hold in Australia. So right now is definitely not the time for despair. It’s time for indignation and action because we are running out of time.

Our ask of you is simple: Know hope, get informed and ask your friends and family to #votefortheplanet so we can make this THE Climate Election.

Because, as a wise man called Bob Brown once said on the banks of the Franklin River (a river that was later saved by the movement he started), “There is no power on this earth that can resist an idea whose time has come.”

The time is now.

And as Richard Flanagan said yesterday at Parliament house at the end of the Stop Adani Convoy “ the fight against Adani is a fight for the soul of our country.. And perhaps the biggest problem isn’t climate change, but the myth that we are powerless. And the power of the people is greater than the people in power.”

Special thanks to Matt Kendall helping me co-author as I drove back from Stop Adani Convoy in Canberra.

As Founder and Director of Fromm, a strategic consultancy based in Byron Bay, Matt believes ongoing transformation is fundamental to the future of work, society and the planet… a future that is decentralised, empathic, collaborative and, therefore, a whole lot more human. AKA “Fuckgiver” - Sara is a connector and advisor of all things that unlock human potential and create connected and conscious communities, but most of the time you will find her in wild places on an adventure. Her real-world projects can be found in peer-reviewed academic publications exploring; transformative learning, sustainable development in the built environment, systems design and impact measurement. She is the Co-Founder and Chief Doer of Futuregiving and Fuckgiving. In a previous life, she was the Education For Sustainability Manager at Macquarie University, Co-host for the Un-school of Disruptive Design and Associate Editor of the International Journal of Sustainability in Higher Education. 4 Simple Tips For Sustainable Gardening According to The Experts This Floating Park is Made Entirely From Recycled Plastic